Cardi B is a proud fan of Lil Nas X.

Last night (May 8), Bardi celebrated the release of her newest Fashion Nova clothing line by performing at Fashion Nova’s Party With Cardi event at Hollywood Palladium in Los Angeles. After performing songs like “I Like It” and “Thotiana (Remix)” with special guest Blueface, the Bronx spitta surprised everyone by bringing out Lil Nas X to perform his chart-topping song “Old Town Road.”

“It’s muthafuckin’ hard to get a No. 1 on the Billboard Hot 100,” Cardi said before she brought Nas X out. “That shit is hard as fuck! So every single time I see somebody getting that spot I be like ‘Damn I’m proud of you bitch. I’m proud of you nigga.’ When I got my first No. 1, I cried like a muthafucka. So I wanna say that I’m so proud of this young guy who’s about to come up and fuck up the stage because his No. 1 is still No. 1 after they tried to deny his muthafuckin’ entry.”

Moments later, Lil Nas X made his way to the stage to the tune of his familiar trap-influenced country beat that began to ring throughout the venue. Bardi didn’t bust out her NSFW remix of the song, but she was visibly excited and bopping around with the rising star as he performed without Billy Ray Cyrus.

“thank you cardi b!!,” Nas X said in a tweet featuring a clip from their time on stage.

thank you cardi b!! pic.twitter.com/dbSRcUY4wT

Live from the Randy Wise Studio 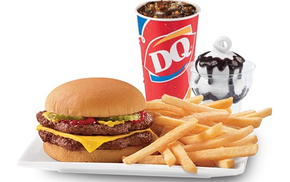 $20 of Food and Drinks at Dairy Queen of Lapeer

Welcome back to Club 93.7 Insider

It appears that you already have an account created within our VIP network of sites on . To keep your personal information safe, we need to verify that it's really you. To activate your account, please confirm your password. When you have confirmed your password, you will be able to log in through Facebook on both sites.

*Please note that your prizes and activities will not be shared between programs within our VIP network.

Welcome back to Club 93.7 Insider

It appears that you already have an account on this site associated with . To connect your existing account just click on the account activation button below. You will maintain your existing VIP profile. After you do this, you will be able to always log in to http://club937.com using your original account information.

*Please note that your prizes and activities will not be shared between programs within our VIP network.

Please fill out the information below to help us provide you a better experience.

Thank you for your request.